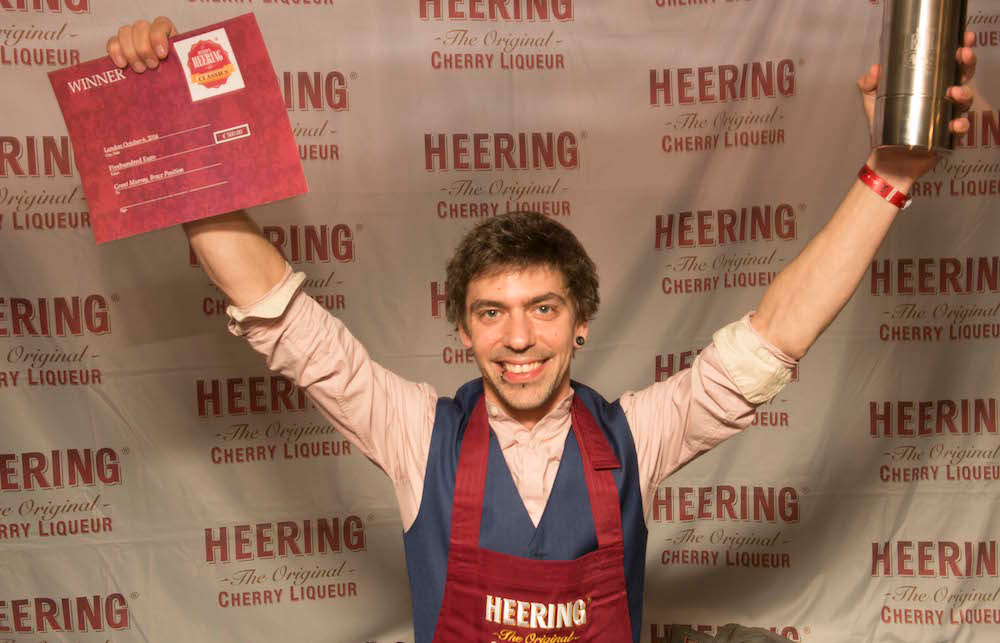 Yes, you read that right!  Our very own Manager of both Bar One and Scotch & Rye is now officially, a world champion!

The Peter F. Heering classics challenge, is an annual global bartender competition that asks bartenders from around the globe to pick a classic cocktail and modernize it with a twist and shake that best defines their talent, taste, personality and what most inspires them about using Cherry Heering in a modern classic cocktail revision.

The 2016 competition began in Summer of this year, asking bartenders from all over the world to submit their recipes online, in the hopes of making the cut!

From a pool of over 2500 submissions across 46 different countries, these online submissions were narrowed down to just 10!

Grant’s cocktail ‘Brace Position’ was selected as one of the top 10 cocktail recipes submitted, which is an incredible achievement in itself!  This sealed Grants place, at the world semi-finals, representing the UK against some of the top Bartenders from Australia, Canada, Greece, Hong Kong, Luxembourg, New Zealand, Singapore, Sweden, and the United States!

The semi finals were held at the Private bar of Simon Difford, founder of the mixology-focused Difford’s Guide, where Grant impressed the judges with his recipe and story of his creation, and amazingly, was put through to the final 5!

After what Grant describes, and the most pressured and most exhilarating experience of his bartending career, presenting his drink to this esteemed panel, Grant clinched the top spot!

“I am so blown away, and unbelievably chuffed. I worked really hard for this and had so much fun doing so. I want to say a massive thank you to everyone for supporting me so incredibly.” Grant said.

When asked what it was that gave Grant the edge over the other competitors, the judges had this to say;

Simon Difford – “Grant made a very tasty cocktail but also his presentation, I mean, the brand owners in the room, I think you may have learnt some things about your brand from him! It was quite something.”

Charlene Dawes – “Very calm, very smooth, and I liked the personal touch with the story”

The recipe for the ‘Brace Position’ is

We asked Grant the inspiration behind his cocktail, and he said

“The inspiration for my drink all surrounded the theme of unity.  The history of Cherry Heering is steeped in the bringing together of people, businesses, flavours and uniting them harmoniously.  The theme of unity extended into my own life as well, from flavours and experiences, to the coming together of my own family. I was able to tell the story of Cherry Heering, while relating it to my own life, which seemed to go down well!”

We asked Grant his final thoughts on this whole experience;

“It’s stll so incredibly surreal!  I have never competed at such a high level before, and I genuinely just had so much fun! I was up against some great people and some brilliant bartending talent.”

“I love this industry, everyone has been so amazing,” he said. “I truly have made some new friends this week and have learned so much from this experience.”