From Inverness to the worlds’ best bar! 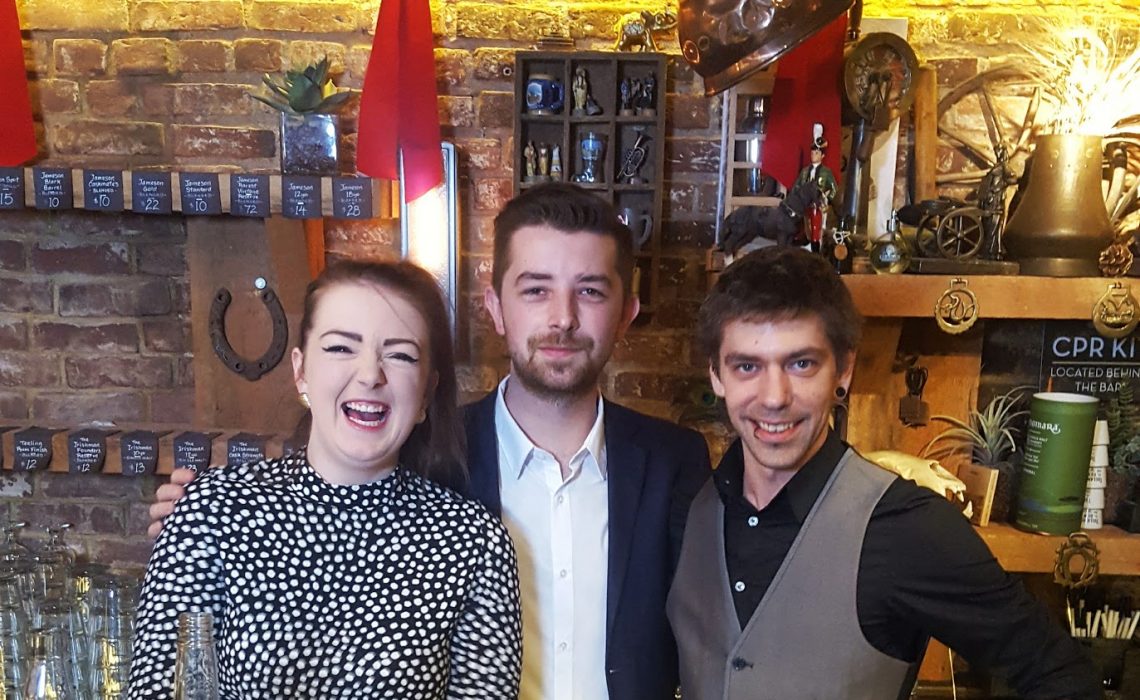 Our resident mixologist, and Multi-Site manager of Bar One and Scotch & Rye has just returned from New York, where he showcased his award-winning drink “The Usual” during a guest shift at none other than the worlds best bar, The Dead Rabbit!

Grant was tasked by Jack Daniels, with creating a cocktail that showcased the flavours and the history of Jack Daniels, through the topics of creativity, entrepreneurialism and consistency.  Pitting his drink against the very best bartenders Scotland had to offer, Grant made the final 11 (yes, 11).  The brand ambassadors of Jack Daniels, then visited each bar of the final 11, where the bartenders got to tell their story, and serve their drink first hand.  In early December, he got the phone call to say that he had made the top 3, won the competition, and would be flying to New York in a weeks’ time!

Grants winning creation was a combination of Jack Daniels Old No. 7, Martini Ambrato Vermouth, and a home-made cherry almond balsamic & cola reduction shrub.  Soon to be available on the permanent cocktail menu at Scotch & Rye, Grant describes this drink as “If a jack & coke, an old fashioned and a Manhattan had an illegitimate child”

Talking about the whole experience, Grant had this to say;

“This whole experience absolutely blew my mind!  On the back of some recent cocktail competitions, I was feeling confident, creative and competitive going into this. And the prospect of entering a cocktail competition with what was essentially a three ingredient Jack & Coke tickled me!  The drink itself, although relatively simple in combination, is super complex in flavour.  The judges said that this, along with the story and ethos that surrounded my creation was what tipped me to the win!

It was a nerve-wracking day working in the bar, waiting for the phone call or the message to say if I’d won or not, and I remember jumping up and down and hugging the customer nearest to me when I got the phone call!  A true dream of mine was coming true!  I have long idolised the Dead Rabbit and the team behind it, and have never even visited America!

Along with my fellow winners Ryan Mowat, and Kaiko Tulloch, we were joined on the trip with some true cocktail royalty such as Simon Difford, of Diffords’ guide and Erik Lorincz of the Savoy.

We all arrived in New York and delved immediately into some sightseeing, and toured some of the best bars and restaurants in the world…all on Jack Daniels’ tab I might add!

Before long, we were preparing ourselves for the guest shift at The Dead Rabbit, which we had been told little about, other than that there would be some special guests.  We jumped into our taxis, with our fruit, syrups, and prep in tow, and headed to the financial district of downtown Manhattan.

And boom.  New York rush hour.  Yes, we were late for our first shift at the worlds’ best bar. We all were. Probably my favourite claim to fame.

After finally reaching the venue, meeting the owners, apologising for being late, and setting up the bar, we were fed, watered, interviewed and briefed on how the night would run.  Three hours of takeover, we would be serving in the top floor of the Dead Rabbit, to an invite only room of industry legends and reporters.  My first customer, my very first customer, was Dale Degroff.  If I wasn’t nervous before, I was now. Nicknamed King Cocktail, Dale (yeah, we’re on first names now) is widely credited with the revival of cocktail culture in New York, and as a result globally, during the 90s! You don’t really get any more important to the world of modern cocktails than him!  I Stumbled and mumbled through the story behind my drink while trying not to drop my shaker, but I presented it to him, and he loved it!

Later in the evening up rocked Erik Lorincz, whom I had been travelling with, but had remained a bit of a reserved and mysterious character to me.  For those of you who don’t know, Erik is the head bartender of the Savoy.  And for those of you who still don’t know, there have only been 10 head bartenders at the savoy since it opened in 1889!  So it’s kind of a big deal.  And although he had a few Jack Daniels in him at the time, his words when trying my drink for the first time will stay with me forever. “This is really good man, really good”. And Erik doesn’t mince his words, if he didn’t like it or thought it could be better, or more balanced, he would have no problem telling me!  That’s it, in my head, I had just completed bartending!

So I relaxed and enjoyed the rest of the night, and after, celebrated a successful and surreal evening in style with my fellow winners Kaiko and Ryan!  What a truly once in a lifetime experience!

But there was no time to sleep it off, the next morning we were straight on a plane, this time destined for Nashville Tennessee!  An absolute hive of activity, live music and marvellous stereotypes, we were once again shown the very best in food, drink and entertainment Nashville had to offer!

The next day, we took a ride out to the home of Jack Daniels, where we were toured around the distillery by none other than Jeff Arnett, the master distiller of the last 40 years!  We were given unprecedented access to areas of the distillery nobody else is permitted to, and allowed to try our hand at tasting some incredibly old whiskey straight from the barrel, setting fire to the wood that would end up being part of the charcoal filtration., and an array of exclusive activities.  Once again, this is an experience that blew my mind every step of the way!

All of this was over 5 days, and was absolutely non-stop!  But along with the highlights of the trip, it is the relationships I built along the way that will stay with me forever.  I made some true friends in everybody that was on that trip, and bonded through some incredible shared experiences, that some of us could only ever have dreamt of.